With great pleasure, we announce the winners of the first Louis M. Herman Research Scholarship. As the top two applicants were very closely placed, Dr Hannah Herman made a personal donation of $5000 USD to support both projects in 2018, the inaugural year of the award. The successful applicants for 2018 are Rebecca Hamilton for her project entitled ‘Cognition in the wild: Dolphin communication during a role-specialized foraging tactic’ and Solene Derville for her project entitled, ‘Whales of the deep: Analyzing movement and diving of humpback whales to understand oceanic breeding congregations in New Caledonia’.

Solène Derville Sorbonne Universités and the Entropie lab (Research Institute for sustainable development) and NGO Opération Cétacés, New Caledonia. Whales of the deep: analyzing movement and diving of humpback whales to understand oceanic breeding congregations in New Caledonia Abstract Humpback whales’ (Megaptera novaeangliae) habitat use in low-latitude breeding grounds is well documented from decades of coastal research. Yet, the use of pelagic habitats during the breeding period and migration has only recently been given attention. In New Caledonia, an archipelago located in the Pacific South West, several seamounts and banks are now considered as breeding ‘arenas’ playing an important role in the hypothesized floating lek breeding system of the local humpback whale population. Yet, the reason why whales would aggregate and move between these offshore waters remains unknown. The relative abundance of maternal females in these unsheltered waters is also puzzling, in comparison to the shallow coastal waters usually occupied by these groups. Using the newest satellite tracking technology, this project aims at understanding the environmentaland social drivers of humpback whale oceanic habitat use during the breeding season. Dive depth will be related to environmental context in order to shed light on the role played by offshore seamounts for humpback whales of the Pacific South West. Patterns of connectivity and behavioural modes will be derived from the movements and dives of individuals from different social class and sex (males and females with or without calf). This study case will provide a unique opportunity to understand the spatio-temporal scale of the humpback whale floating lek systems and explore the drivers of habitat selection during the breeding season. https://www.researchgate.net/profile/Solene_Derville 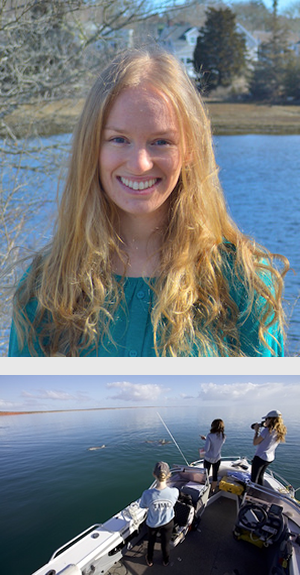 Rebecca “Becca” Hamilton University of Massachusetts – Dartmouth Cedar Key Dolphin Project Cognition in the wild: dolphin communication during a role-specialized foraging tactic Abstract A division of labor with role specialization (DLRS) is defined as individuals specializing in a subtask during repetitions of a group task. This behavior is ubiquitous in humans, but there are currently only three examples in non-human mammals. Cetaceans are known for their diversity of foraging tactics. One population of bottlenose dolphins (Tursiops truncatus) in Cedar Key, Florida, is the only confirmed example of a marine mammal using role specialization during foraging. In this behavior, a ‘driver’ dolphin herds fish in a circle towards ‘barrier’ dolphins. However, it is currently unknown how these animals facilitate this division of labor. By recording vocalizations during driver-barrier feeding, this study will, for the first time, investigate how bottlenose dolphins facilitate coordination of role-specialized behavior. Answers unlocked by this study will not only further our understanding of complex cognition in wild dolphins, but it will also shed light on the proximate mechanisms of role specialization. https://www.facebook.com/CedarKeyDolphinProject/ www.rahamilton.weebly.com