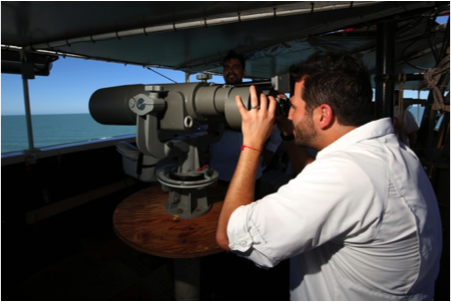 The mood on the R/V Ocean Starr was jubilation and relief. After the first four days of a 64 day survey, two vaquitas were spotted swimming in calm waters near the fishing village of San Felipe. The next day the survey was launched by the Secretary of the Environment and Natural Resources Rafael Pacchiano Alamán and a host of dignitaries. Miraculously, vaquita appeared and were seen by the Secretary and several other dignitaries as if the vaquita knew to appear for those who had the power to save them.

After 20 days, 25 vaquitas have been spotted though some may have been seen multiple times. The survey is not a census (count of individuals) but a density estimate. Speculation about what the number of animals seen means is counterproductive. What is clear is that vaquitas, unlike baiji, are still swimming about in a habitat that is healthy and free of gillnets.

The Mexican Government put into place an emergency ban of gillnets within the distribution of vaquitas, the first large scale ban of small-type fishery gillnetting in the world (as reported on the IUCN CSG website in mid-January 2015). The ban was coupled with a compensation package to the fishermen and those reliant on the fishing industry. In hard economic times, the Mexican Government is paying $37 million per year to save their species. President Peña Nieto rolled out the the strategy to ban gillnets that includes the new Navy enforcement program in April in San Felipe, one of the two small fishing villages affected by the ban. 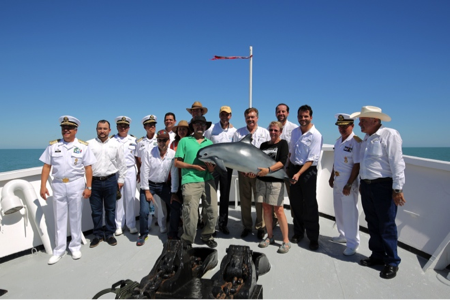 Dignitaries at the launch of Expedición Internacional Vaquita 2015 with Chief Scientists Drs. Lorenzo Rojas-Bracho and Barbara Taylor and mascot Vicki the Vaquita (loaned by Tom Jefferson, photo by Todd Pusser).

The government of Mexico is conducting this survey to find out how many vaquitas remain at the start of the emergency ban on gillnets. The perilous state of vaquita was documented using an innovative scientific method that uses acoustic detectors to monitor vaquitas (details available here in English, and in Spanish). These detectors provide over 3,000 days of continuous listening each year. The detectors indicate a 30%/year decline between 2011 and 2014 (details here). This continuous monitoring program prompted the emergency actions. The most recent international recovery team meeting commended the 2-year ban but also strongly recommended it be a permanent ban (see all the recommendations here).

Each survey has been a collaborative effort between Mexico and the US. The survey design has involved the world’s top experts to get the most precise estimate possible of this very rare animal (more details at Survey Design). In waters that usually would have over 700 kilometers of net set each day for the start of shrimp season, only a single gillnet has been seen. “Enforcement and the cooperation of fishermen has been critical for the ban”, says Rafael Pacchiano, Minister of the Environment and strong supporter of vaquita conservation efforts. 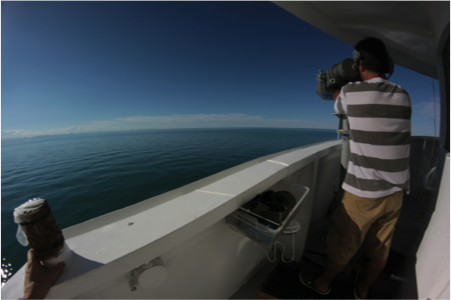 Juan Carlos Salinas looking for vaquitas in the gillnet free waters of the northern Gulf of California.

The survey has both a visual team working on a ship in waters more than 20 meters deep and the passive acoustic detectors in shallower waters. There is an area of overlap to calibrate between the visual and acoustic methods. To make the estimate as precise as possible, the survey is using the same ship that was used in 1997 and 2008 for the other two abundance estimates made of vaquita. The visual team uses 6 high power binoculars to spot the small porpoises that are only visible in very calm seas. The acoustic effort involves 135 detectors placed in a grid. Both visual and acoustic scientists will work from September 26 through December 3, 2015. Results of the abundance estimate are expected in the spring of 2016.