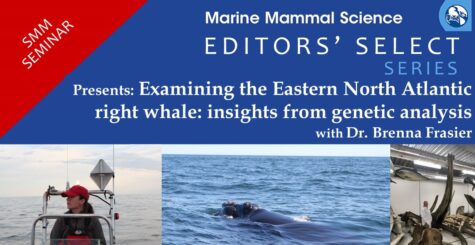 This event is free to attend and presented online via Zoom, but registration is required.
Register here: https://us06web.zoom.us/webinar/register/WN_hLrr4SKAQi-wLPXyakLgtA
Space on Zoom is limited to the first 500 attendees. The talk will also be streamed live on the SMM Facebook page.

About this talk:
The North Atlantic right whale was once present in both the Western and Eastern North Atlantic, but has been extirpated from the Eastern North Atlantic as a result of over a thousand years of whaling activities. It has not been identified whether the animals that were once present in the Eastern North Atlantic were a distinct population from the small group of animals remaining today in the Western North Atlantic. Whaling records suggest that animals in each of these regions may have had distinct habitats, and possibly distinct populations, but what does genetic data suggest? To address this question, we examined the genetic characteristics of mitochondrial and nuclear DNA from 24 whale bones that range in age from the 4th to the 20th century from around the North Atlantic. The interpretation of the results is challenging, especially in a species that has a long history of commercial whaling. However, all evidence combined suggests that there was some degree of isolation between whales in each of these two regions.

About the presenter:
Brenna Frasier is trained as a biologist and has studied marine mammals for almost 25 years. Her research has focused on DNA analysis (primarily ancient DNA) as a tool to address evolutionary, conservation and species management questions with a particular interest in examining human use of whales over the last millennia, whether for commercial or subsistence use. This has culminated in projects examining 20th century whaling in Antarctica, 16th century Basque whaling of right and bowhead whales along the coast of Canada, and Norse whale-use over the past 1000 years around the North Atlantic. While most of her work has focused on marine mammals such as the North Atlantic right whale, beluga whale and Maritimes walrus, she has also studied a variety of other animals, including the Sable Island horses and several bat species.

Brenna has a passion for facilitating science and natural history learning and communicating science in unique and natural environments which has led to an array of other outreach-based projects including the development of marine mammal and forensic science camps for teens, supporting a local Forest School, writing for an array of audiences and completing field guides to assist in Traditional Ecological Knowledge (TEK) studies on marine mammals in the Canadian Arctic. She is currently the Curator of Zoology of the Nova Scotia Museum, in Halifax, Nova Scotia, Canada.

Open access to this article is made temporarily available in the weeks around the presentation and can be found here. Current SMM members have access to all other Marine Mammal Science papers.

Missed a presentation or want to share this series with a friend? All previous Editors’ Select  presentations are recorded and archived on our YouTube channel here: https://www.youtube.com/playlist?list=PLUc78IynQlubS2DVS1VZoplf_t42-yZOO