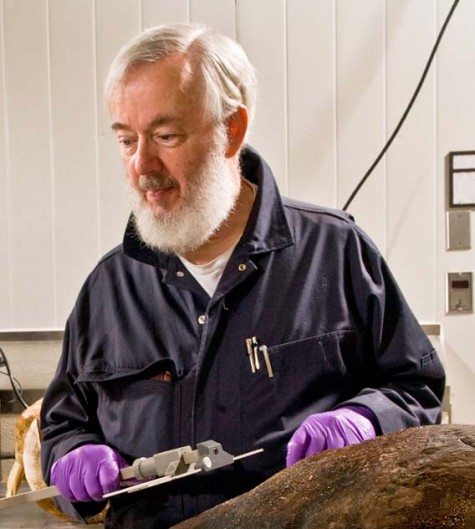 I am delighted to announce that the winner the 2015 Norris Award is James Mead. Jim is a truly worthy recipient of an award which was established in the name of the society’s founding president to acknowledge his exemplary lifetime contribution to science and society through research, teaching, and service in marine mammalogy.

Jim is Curator Emeritus at the Smithsonian, a title bestowed upon him on his retirement in 2009. Jim was appointed curator of marine mammals at the Natural History Museum, Smithsonian Institution, in 1972 and it is from his work here, particularly on anatomy and ziphiids, that he is best known. Jim has published widely in science on cetacean biology, usually specimen – informed, as well as books for a more general audience, such as “Whales in Question”. His greatest work is the lexicon on the dolphin skull which took some 15 years of research and writing.

Jim first discovered an interest in natural history during his childhood in and around the Olympic Peninsula, Washington State, USA. As a school kid, he helped his dad to log trees, learned to drive a bulldozer and drove truckloads of logs to the mill. This early foray into logging convinced him to take up a different career and he subsequently won a place at Yale University, Connecticut, USA, with the intention of becoming a botanist. Jim, in fact, drifted into vertebrate paleontology and while conducting field work in Kenya came across a fossil in an ancient river strata which catalyzed his career long discourse in ziphiid anatomy. After Yale, Jim moved to Austin, Texas, to study for a masters on fossils where he also developed a proficiency with human anatomy. More significantly, Jim bought his Land Rover which still survives in Jim’s possession today! And, perhaps more importantly, he gained a room mate, his future wife, Becky Maglidt.

Following his masters, it was off to the University of Chicago, Illinois, to study for his PhD. By chance, Jim had an opportunity to dissect a dolphin and it was this event that set him on the path to his career in cetology. His PhD led to a major monograph on the anatomy of the dolphin head and he established the anatomical basis for echolocation. After his PhD, Jim worked in the Canadian Province of Newfoundland where he gained experience with large cetaceans. Jim was appointed as curator of marine mammals at the Smithsonian in 1972, at about the same time as Charley Potter who became long-term collection manager. Jim and Charley developed an active recovery program for cetaceans from USA eastern shores. Jim went so far as to learn to fly while working in Cape Hatteras, North Carolina, to increase their ability to spot strandings. The recovered specimens were prepared in a necropsy lab located in the centre of one of the Museum’s courtyards. A pungent procedure that ensured all the staff knew when THAT work was under way! Jim and Charley worked hard to fill the gaps in the Smithsonian marine mammal collection which has resulted in the collection being the largest and most important in the world today.

Jim was not only an excellent and dedicated researcher, he also encouraged pre- and post-docs to visit and work with the Marine Mammal Program and thus he launched many young cetologists on their careers. His office was a clearing-house for cetology, a place to meet colleagues and to admire Jim’s library. Visits to Jim’s office were excellent social occasions and provided the motivation to eat out at a new place or look at a new exhibition. Likewise, Jim’s house in Arlington, commonly known as the “the Happiness Hotel”, has been a meeting place and both short and long-term home for interns, fellowship students and diverse cetological vagrants.

As a recipient of the Norris Award, Jim has been invited to give a plenary lecture at the Society for Marine Mammalogy Biennial Conference between December 13-18, 2015 and to write an associated paper for Marine Mammal Science.