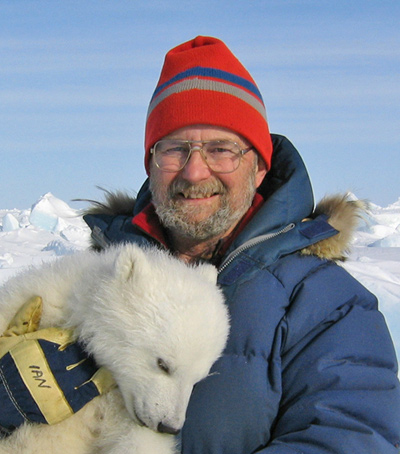 I have the great pleasure in congratulating Dr. Ian Stirling on being the 2013 winner of the Society’s premier award, the Kenneth S. Norris Career Achievement Award, a fitting acknowledgement to his contribution to marine mammalogy.

The Society established the Kenneth S. Norris career achievement award in honour of the Society’s founding president and one of the truly great figures from our past. The Norris award is an acknowledgement of your exemplary lifetime contribution to science and society through research, teaching, and service in marine mammalogy. Ian presented a plenary talk at the 2013 Biennial Conference and his Norris Award article has been published in Marine Mammal Science Kenneth S. Norris Lifetime Achievement Award: Ian Stirling.

Ian Stirling is a Research Scientist Emeritus with Environment Canada and an Adjunct Professor in the Department of Biological Sciences, University of Alberta, Edmonton, Canada. He has done research on southern fur seals, polar bears, and polar seals (Arctic and Antarctic) for 47 years, particularly in the areas of ecology, behaviour, evolution, relationships between polar bears and seals, the biological importance of polynyas, and the conservation and management of polar marine mammals and ecosystems.

Ian was a charter member of SMM (and a current life member), a member of the original editorial board for the Journal of Marine Mammal Science, and a past President.

His most recent book, for both scientists and the lay public alike is: Polar Bears: The Natural History of a Threatened Species.