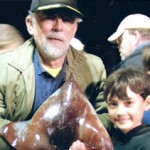 In the run-up to the SMM biennial conference, the Board of Governors and Board of Associate Editors have selected Bill Perrin as the winner of the Kenneth S. Norris Lifetime Achievement Award.

Dr. Perrin, a past-president of SMM and current Board member, has been recognized for the high standards of excellence that he has demonstrated in his work, along with his dedication, perseverance, and strength of character in dealing with highly controversial issues.

His efforts have set an important example for the next generations of marine mammal scientists, and they have made a large and positive difference for the species with which Bill has worked, especially members of the genus Stenella, around the world.

The winner of the award delivers a plenary address at the next biennial conference, and publishes an associated article in Marine Mammal Science.

Bill has been dutifully informed that receipt of this award does not mean that he can refrain from continuing his contributions to the field and the Society.