Cetacean biologist heralded for over 30 years of research and conservation efforts.

After reviewing an impressive slate of nominees, the Society Conservation Committee and Board selected Dr. John Wang as this year’s recipient. 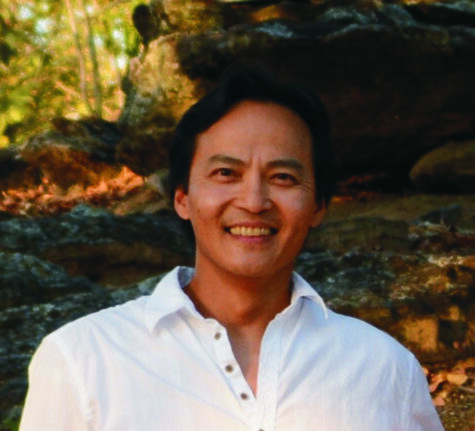 John’s work started in the chilly waters of Canada’s Bay of Fundy in the late 1980’s. Donning a wetsuit and snorkeling equipment, John jumped into herring weirs, a fixed fishing trap, to help fishermen release harbor porpoise. The fishermen used seine nets to remove herring that had aggregated in the weirs and porpoise would become trapped in the nets as they were hauled in. That work quickly pivoted to focusing on harbor porpoise bycatch in the gillnet fishery and lead Dr. Wang to start the first groundfish gillnet observer program in Canada.

In the mid-1990’s the global issue of cetacean bycatch pulled John beyond the borders of Canada to the other side of the planet when he started working on understanding cetacean fauna and bycatch throughout Taiwan. Early investigations consisted of visiting fishing ports around the country, recording carcasses, and conducting interviews to understand local fisheries. He attended stranding events and visited various scientific and academic institutions to examine their specimen collections. These efforts resulted in one clear conclusion – bycatch was a significant conservation issue for cetaceans in Taiwan. Specifically, large-mesh pelagic driftnets were clearly a serious problem as well as smaller-scale gillnet fisheries throughout Taiwan with a total annual cetacean bycatch in the thousands to tens of thousands per year for Taiwanese fisheries. His path for cetacean conservation in Taiwan was set.

In 2002, John was encouraged by a good friend and colleague to conduct exploratory surveys in the inshore waters along the heavily-industrialized and developed coast of western Taiwan. It was during these surveys that the endemic and highly restricted Taiwanese white (or humpback) dolphin subspecies was discovered. Given the status of the subspecies and the many threats it faced, John decided to put the driftnet bycatch issue on the backburner as urgent attention and focus on the Taiwanese humpback dolphin was the priority. For more information about the Taiwaianese humpback dolphins, threats and recovery actions please visit the IUCN Red List.

To this day, conservation of the Taiwanese humpback dolphin still occupies most of John’s attention. However, his expertise and decades of experience working with small cetaceans and local communities/fisheries has proven valuable to other ongoing bycatch reduction and other conservation efforts around the globe including finless porpoise bycatch in several areas in east Asia, underwater noise and cetaceans, Indo-Pacific humpback conservation in other parts of east Asia and river dolphins in Brazil.

Dr. Wang has made a career out of working on challenging conservation issues, many of which are ongoing – taking years or decades to affect change. We asked John why he does his work and what kept him motivated to continue his efforts all these years. His response spoke of a deeply seated belief that scientists have a duty to use their abilities to better the natural world.

“ Other living things have no “voices” (or votes) to choose not to be exploited and to be driven to extinction so we should lend them our voices. The voices of scientists are often “louder” and will be given more attention by others. Although the main responsibility of a scientist is to conduct solid, objective research to better our knowledge of the universe, being a scientist is a small subset of the responsibilities of being human. Humans have a much larger responsibility to not stay quiet and voiceless when we possess specialized/privileged knowledge of conservation issues (some of us may be the only people who know of some issues) and this responsibility supersedes those of being scientists. It is clear that there is no reason why scientists cannot advocate for conservation and environment issues while continuing to fulfill his/her role as a scientist and maintain a high level of credibility and scientific integrity.”

As far as what motivates him, it is about knowing he is doing what he believes is right.

“Working on conservation issues is difficult because there is often strong opposition, the chance of failure is high and rewards or accolades are few (if any). But it’s the right thing to do and being self-satisfied with doing the right thing is the strongest motivation.”